North facing houses are the most common orientation that you will find around yourself. It is done so, as north facing house vastu are most auspicious as per vastu experts in India. it makes perfect sense that north being the house of Kuber, the lord of wealth, offers the occupants ample opportunities to gain abundant wealth. When it comes to pick a direction for your home to face while building, north certainly is the most prominent direction. However, having only the north facing is not enough to ensure a cash inflow towards your home; neither is all north facing properties are auspicious for you. so, before you jump to purchase a property with north facing orientation, you need to consider some other factors as well to make it happen. So, read on to know them in depth.

What is north facing house vastu?

Before understanding the various aspects of the same, lets first understand what it is mean by north facing house vastu, as many people gets confused regarding it. They assume it to be the direction in which the main road is located with respect to the house. However, it is completely incorrect. In proper terms, the direction in which you face while going out through the main door, is the direction that your home is facing. So, if you move out in north direction while leaving from main entrance, you have a north facing house vastu. A south, east or west facing vastu works in same way.

As already explained, as per vastu experts and from the perspective of most people, north facing houses are the best. Lord kuber, being the lord of this direction, makes it highly likely to help gain wealth for the occupants of north facing property. But you need to some other factors of design as well to ensure it. These things include factors such as, number and size of the doors, placement of the kitchen, bathroom, puja room etc. So, a proper evaluation is required to ensure whether or not it is good or bad for its occupants.

Is north facing house vastu apt for everyone

Even having such positive aspects associated with it, a north facing house is not necessarily suitable for everyone. It depends on the needs of the people living in it, along with their profession and/or their zodiac signs. As per vastu experts, north facing properties have been found most perfect for the people owing their business or being involved in financial services as their profession. Apart from people belonging to the financial sectors, north facing house vastu are good for people working in printing and publishing sectors, as north direction is also associated with the planet mercury. Also, north direction represents the element water, and thus can lead to prosperity for the people associated with media and entertainment industry.

Thus, people from the following industries/profession can for go for north facing property-

Apart from professions, astrology plays an overall role in suitability of a property as well. So, people with the following zodiac signs are well suited for a north facing house vastu-

However, make sure you are referring to your zodiac signs as per your natal charts, and not just by browsing your birth date on internet as it may give you inaccurate results.

Next, let’s go through the details of placement if various rooms in a north facing home and its effects.

The placements of the main doors and other rooms are very crucial in determining whether a north facing property is good or not. Lets cover the placemnt of main door, followed by staircase, kitchen, temple, and septic tank in such as property.

The main entrance or the door is an important threshold for any property. So, having a right placement of the main door can make your overall north facing house vastu good or bad. as the main door connects the inside energy with the outer environment, paying special attention to its placement is of utmost importance. Though for any property, having a north facing entrance is considered as very good, but when it comes to a north facing one, there are several other things to consider as well. For instance, having a north west main door can bring severe bad luck for the occupants.

So, we need to understand some other aspects of vastu. There are 8 steps in the north side of a house, which are known as padas in vastu. Each of these have its own specifications and importance. From left to right (north east to north west), these are called- Roga, Naga, Mukhya, Bhallat, Soma, Bhujang, Aditi and Diti. Refer to the following image for more understanding. 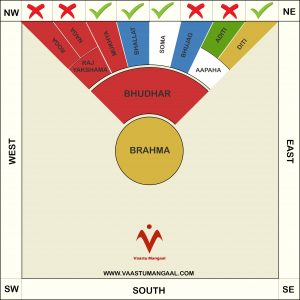 For north facing property, the 5th pada, the soma is the auspicious one for placing the main door, as it is the house of lord Kuber. Apart from it, padas Mukhya, Bhallat and Diti are most auspicious as well, which are the 3rd, 4th and 8th padas. The Mukhya is the main deity of the house and thus grant the manifestation strength of the vastu. Bhallat is deity who grant abundant wealth. Diti is the mother of asuras, but also grants riches.

Thus, if you own a north facing house vastu, pick either of these 4 padas for placing main door.

Placement of the staircase for North facing house

After the main door, comes the turn of the staircase placement in a north facing home. It is important to note that this holds true for both internal and external staircase. So, follow the following advise for it, that has been offered by vastu experts in India-

So, the orientation depends of the placement of the staircase in the plot. So, consulting a vastu expert is crucial to ensure you are making the home vastu compliant.

Placement of puja room in a north facing house vastu

Puja room is of special importance in every household as it houses the energy of the deities. As per vastu, placement of Pooja room in north facing house can be carried out in few ways. The west direction is the best for placing the pooja room. This will ensure that the idols or photos of gods will face towards the east. This is the precise reason why most of the ancient Indian temples are designed in west as well. However, the exact opposite can be done as well, implying placing temple in east to face the idols in the west.

Apart from these, north east, east or west directions are also suitable for placing a pooja room in a north facing vastu.

Kitchen is as holy a place just as a temple. So, its placement is quite important in every home, and north facing house vastu. It is a common belief that north east is the best direction for a kitchen, as it is the zone of water element. However, it is the wrong direction for a north facing house one as it can destroy it. It can cause some severe neurological issues and family disputes, and might cause legal and financial issues.

So, go for south east or south direction in general. However, the north west direction is quite good for such a property as well.

Both these rooms are filled with water elements and it accumulates negative energy from the entire house. So, its placement plays an important role. Usually most septic tanks are placing right in the front of the house, on underground level, as it can be connected to waste pipeline. However, for a north facing house vastu, it can be problematic as such orientation will align with directions north, north west or north east. But, making either of bathroom or septic tank is a big no, as it can disrupt the water element and as a result it can damage the functions of the kidneys of the occupants of the house. Moreover, it can also cause financial troubles. So, vastu experts highly recommends against placing either septic tank or bathroom on front side of the plot.

Go for South of South West (SSW), West of North West (WNW), and East of South East (ESE) zones are good for placing either of these facilities.

So, in a nutshell, we have covered the placement of all the important rooms in accordance to a north facing plot. Now, let’s list out some of the most crucial Do’s and don’ts for you, if you are making a north facing house vastu. First, let’s discuss the do’s and then we will cover the don’ts.

So, lets go through some of the most common FAQs and its precise answers regarding this topic, before wrapping up this article-

Is north entrance good as per vastu?

Yes, as per vastu shastra, north entrance is considered as auspicious. Several factors suggests that such a vastu can help you gain wealth and prosperity.

Can we buy north facing house?

Yes, getting a north facing house is a good choice. However, it should be complaint as per many other aspects of vastu shastra. So it is best to consult a vastu expert before buying any property.

Why are north facing vastu better?

North has a special significance in vastu shatra. As kuber, the lord of wealth is the master of this direction, a north facing vastu is consider better than the rest of the directional orientation.

What does north facing house means?

There is a very simple way to evaluate the same. If you walk in north direction, while stepping out of your home by main entrance, then your property is a north facing house.

Yes, north facing houses are considered as good in general by expert vastu analysts in India, with respect to any other direction facing houses.

So, as you can see, the north facing house vastu is a pretty good to get financial benefit as it acts as magnet for attracting wealth and prosperity. However, this information that is given in this article are true in general speaking. Even through you fulfil any one or more of the above-mentioned criterions, don’t forget to consult a vastu expert either way, to make sure your house is perfect in every way, as per vastu. As any non-compliance in the vastu can cause wealth loss and hamper in daily life. For a complete analysis of the vastu of your property, get in touch with our expert vastu expert, Mr. Pinaki Pal.

For more information on vastu for home, for industry, for factory or for numerology consultation, get in touch with Vaastu Mangaal. Feel free to drop us any enruiry related to the services we just mentioned. Also share this article with your friends or family, if they are looking ahead to purchase a flat.